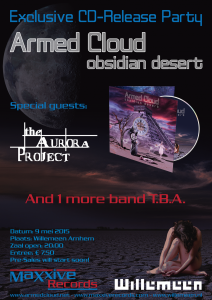 The night will be filled with 3 great bands! Of course, Armed Cloud will perform a set to introduce their album, but we also have The Aurora Project playing!

The third band will be announced later! It will be worth it!

Tickets will only cost € 7,50 and presales will start soon!

Be sure to be there! You don’t want to miss it!